Teachers wary of 'no cuts' claim 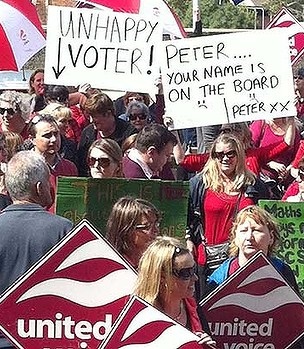 Many members of Western Australia’s education sector are continuing to direct their outrage at the state’s premier and education minister, with reports this week the government is looking to axe hundreds of teachers’ positions in the next year.

The WA State School Teachers’ union has warned of the implications of a recently tabled State Opposition paper titled the 'Schools FTE Allocations' before the Education Department. The Union says the document infers some 600 positions could be gone, with references to a higher student to teacher ratio in the state next year.

Teacher’s Union President Anne Gisborne says: “We have not received the full information in respect to the complete new funding model and that funding model we understand is going to be delivered with even further cuts... we're still trying to work our way to understand how the premier could expect that we would be taking on board in 2014 an additional 6,000 students without extra teachers.”

West Australian Premier Colin Barnett says he has no plans to cut teacher positions, but has conceded that resources will be stretched under the state’s educational reforms.

“What we've said, and we've said consistently, is that the numbers of teachers for 2014 will the same as in 2013,” Mr Barnett said.

“Now as a result of the fact that we'll be changing the formula as we move to a student-centred model in 2015, some schools next year will have more staff, some will have less staff but ultimately we'll get to a situation where we have a much more equitable and dare I say it, better targeted education system.”

WA Education Minister Peter Collier has again stated no cuts will be made, saying “There'll be exactly the same number of teachers in 2014 as there are in 2013,”

“At the moment we have an inequitable system where you have, in terms of teacher numbers to ratio at the secondary level, among the most inefficient in the nation whereas at the primary level the situation is reversed... now that's just not appropriate.”