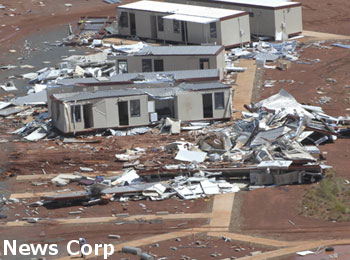 An inquiry into two deaths at mining firm FMG’s Rail Camp One has heard that there may have been surveyor error involved in the collapse of buildings during the devastating Cyclone George in 2007.

Last week, the West Australian Coroner’s Court heard from the former surveyor of the Shire of East Pilbara, Chad Harvey.

The site had been approved for wind region “A”, but the camp was supposed to be built to wind region “C” strength.

Mr Harvey told the court a series of errors with the buildings’ coordinates led him to he incorrectly determine the site was in a rural area with low cyclone risk, the West Australian reports.

Harvey said he plotted the area he thought the dongas were being built by eye, on a map, after only having seen the geographical coordinates on a colleague's computer screen.

“Do you accept now that was the incorrect wind region?” counsel assisting Philip Urquhart asked.

Fourteen witnesses will give evidence across the ten-day inquest, which should run until late this week.

FMG has already been cleared of any wrongdoing in relation to the two deaths, and the Supreme Court has rejected a WorkSafe appeal, upholding the existing decision that Fortescue had not failed in its duty of care.

NT Link, the contractor that installed the dongas, has also been given immunity by WorkSafe as part of the court case.