Stoush around the corner at coal site 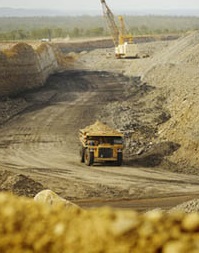 An industrial battle with parallels to action in the 1990s is on the horizon in Queensland.

A potentially bitter dispute is unfolding in the coal fields of Central Queensland, with claims mine-owner Glencore is planning to shut down one of the regions oldest digs to re-tool for bigger profits and less workers.

The coal mine at Collinsville has been in operation under various owners for over 100 years, but current owner Glencore says work will be suspended at the end of the week while new technology is installed. The operator has worried workers with the further announcement that it will not re-open until more flexible working conditions are created, under a collective agreement or individual contracts.

Glencore has refused to give preference of hiring to the existing workforce, leading many to believe non-union workers will be shipped in when the mine starts up again.

Steve Smyth from the Construction, Forestry, Mining and Energy Union (CMFEU) says it has happened before.

“Obvious parallels to what happened with Patricks on the waterfront, with the replacement workforce,” he claimed, “the view there was to replace the unionised workers on the docks, and we've got the similar situation here where we've got Glencore want to bring in replacement workforce, and on the back of that, bring them in on an agreement which offers less.”

"The end goal that they want is to de-unionise the place and have a replacement workforce there.”

Mr Smyth says the mine is trying to reinstate a greenfield enterprise agreement, which normally only applies to new ventures.

“Glencore have come back to us and said that they'll only employ people if there's a greenfield agreement in place, which obviously a greenfield agreement doesn't apply to a mine that's been operating nearly 100 years... because the union won't capitulate to Glencore's demands on a lesser agreement, and not offering employment to the current Theiss employees, Glencore's going to shut the mine.”

Glencore said in a statement: “We believe there can be a profitable future for mining at Collinsville, but only if we make certain changes... a critical part of the long term plan will be increasing labour and equipment productivity... we have no preference for any specific type of labour agreement but any agreement must be modern, flexible and without restrictions.”