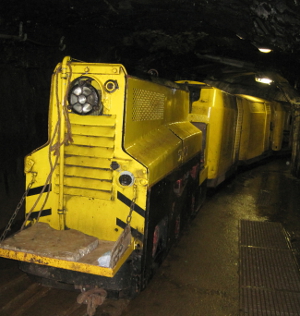 Rio Tinto says robots are the future for productive mining, but the CFMEU says it won’t let human workers be replaced.

Rio Tinto’s CEO Sam Walsh says he brought in automated workshops when he was head of Nissan’s manufacturing operations, in dirty and difficult places he says Australians did not want to work.

“Some people have expressed concern about automation but quite frankly it’s getting harder and harder to attract young people to remote areas,” he said.

“There are jobs for those who want them but it will be supplemented by automated trucks and trains and drills and so on.

“There are trade-offs between automation and having operators do things. If you are not careful it will reach the stage where people price themselves out of the market.

“In the Pilbara, it was driven by the fact that it was very hard to get labour.

“The mere fact that we are automating trucks and trains in the Pilbara is economic. There was a business case for it. That’s indicating there is an issue

“I have not heard anyone complaining about the program we set up,” he said.

“All that’s happening is a very cheap, nasty, and irrelevant comparison between what those same companies are paying in far less developed countries compared to Australia, it is totally unreasonable,” he told Australian Mining.

“Wages are fair, in some circumstances they could be better, but they are certainly reasonable given all of the conditions, and indeed the profitability of the mining industry in Australia.

“It’s stupid to make those comparisons, and it’s unreasonable, and it borders on immoral.”

“Rio is renowned globally as a company that despises the idea of having to communicate with its employees, it would much prefer to do that in a robotic sense without dealing with human beings,” Vickers said.

The CFMEU representative says many jobs will still require humans input for servicing and maintaining robotic equipment, and that Rio Tinto will look to send even these jobs offshore.

“You can’t put a robot in to change the oil on a truck or to change the tires, you can use GPS positioning, and someone playing with a joystick down in Perth, you can move those trucks around, but what you can’t do is replace the actual hard human labour on the ground doing the maintenance work,” Mr Vickers said.

“Of course, if it could be done cheaply and efficiently, Rio Tinto would put those trucks on a boat and take them to Thailand or Vietnam or Bangladesh and get them serviced there but clearly that’s not an option, not at the present time.

“The idea of taking maintenance work offshore is only available to them if they get further assistance from the federal government in terms of 457 visas,” he said.