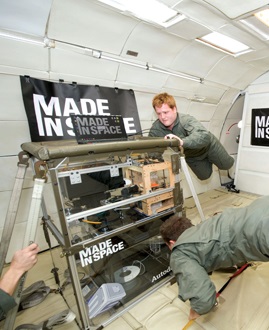 NASA will soon be able to build the tools it needs from a small factory in space, with the Agency’s plan to fly a 3-D printer up to the space station.

The digitally-defined additive manufacturing techniques of compact 3-D printers have already caught the attention of engineers and laymen down on earth, with thousands now enjoying the thrill of designing and making things for themselves.

Now NASA is planning to give the same capabilities to astronauts, cutting down on time and costs for flying extraneous or single-use equipment all the way up to the final frontier.

Astrological engineers are already working on some mind-boggling possibilities, including tiny printed satellites which could be launched from a dock at the International Space Station. More mundane but hugely useful applications include printing replacement parts and rocket components.

Inventor Andrew Filo, who is consulting with NASA on the project, says: “You can get rid of concepts like ‘rationing’, ‘scarce’ or ‘irreplaceable’.”

“If you want to be adaptable, you have to be able to design and manufacture on the fly, and that's where 3D printing in space comes in,” said Dave Korsmeyer, director of engineering at NASA's Ames Research Center at Moffett Field, near San Francisco.

The first printer to be flown to space will be a demonstration model, but the idea is one that NASA is pursuing with gusto.

“Imagine an astronaut needing to make a life-or-death repair on the International Space Station... rather than hoping that the necessary parts and tools are on the station already, what if the parts could be 3D printed when they needed them?” said Aaron Kemmer, CEO of Made in Space – an engineering group started specifically for 3-D printing off-world.

In the future the engineers say we may be flinging small autonomous factories all over space, ready to build everything we need to colonise and live comfortably throughout the galaxy.