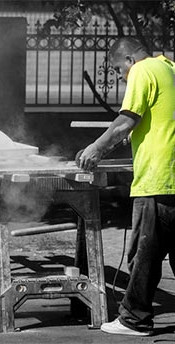 The Queensland Government has responded to the death of an engineered stone worker.

Gold Coast stonemason Anthony White has been remembered for his role in exposing the dangers of silica dust.

He is the first person from the engineered stone industry in Queensland to die from silicosis.

“On behalf of the Government, I extend my deepest sympathies and condolences to his family and friends,” Queensland Industrial Relations Minister Grace Grace said in a statement this week.

“Even in the face of immense personal tragedy, Mr White showed incredible bravery in highlighting the deadly consequences of prolonged and unsafe exposure to silica dust.”

The state is now planning to ban dry-cutting of engineered stone.

“Engineered stone industry workers and their families can be assured that we’re doing all we can to support workers diagnosed with this disease,” Ms Grace said.

Since the first urgent safety warning was issued on 18 September 2018, the Government says it has: