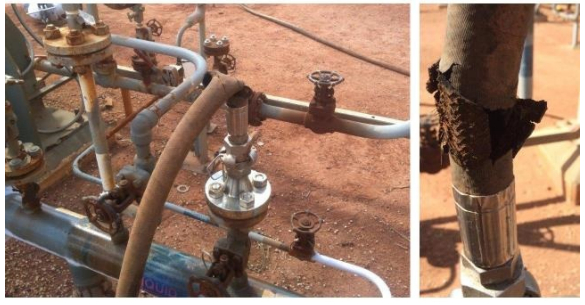 Authorities are investigating serious burns suffered by a resources industry worker, who was injured by a hose failure that left him with severe chemical burns.

Western Australia’s Department of Mines and Petroleum has released a significant incident report that states a process worker was exposed below the waist to pressurised anhydrous ammonia at about -33°C.

A process worker and colleague were preparing for a scheduled maintenance task in the ammonia storage area of a processing plant.

As part of a routine purging operation, the process worker connected a flexible rubber hose via a coupling to a purge connection point. The purge hose was charged with nitrogen and the valve was being opened slowly, allowing nitrogen to flow into the system, when the hose ruptured above the connection point.

The worker was exposed to the pressurised anhydrous ammonia, and was enveloped in the ensuing ammonia cloud.

His colleague was able to get the worker to a nearby safety shower before contacting the site’s emergency services. The worker was air lifted to a city hospital and treated for serious chemical burns.

The department deemed that the direct causes were the purge hose failing as the valve was opened, and the fact that the worker was next to the hose when it failed.

But the authorities also highlighted a set of contributory causes that the mine will have to work on.

It appears that the hose was not in a serviceable condition, with factors including:

Although there were several procedures covering flexible hose safety and integrity, the procedures were either past their review date or under review, and most operators were not aware of their availability.

The processing plant had experienced other hose failures over the previous 12 months and had implemented a training program for all workers covering:

In this incident, it appears that not all aspects relating to flexible hose safety and integrity were followed when the hose was selected for the task.

The DMP has recommended that more care be taken when selecting hoses, the implementation of training programs and management systems to ensure workers are educated about managing hose storage.

It has also called for more inspections and maintenance, and for hoses deemed unserviceable to be taken out of service and discarded.