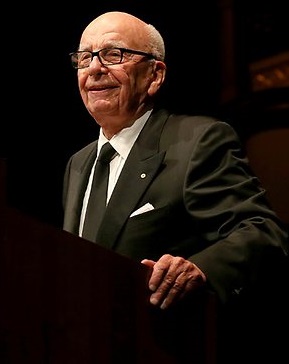 Media boss Rupert Murdoch addressed some of Australia’s most prominent figures last night, praising the nation for overcoming the “primeval prejudices” and “stuffy, narrow-minded elitism” of its colonial past.

Mr Murdoch spoke fondly of the country from which he gave up his citizenship to own TV stations in the United States, claiming that having more Catholics in parliament was a sign the nation is moving forward.

“Australia has emerged from its inauspicious colonial beginnings to become a proud nation,” Murdoch said.

“Many of you will remember a day when a Catholic was rare in a Liberal cabinet... Those days are now behind us, and Prime Minister Tony Abbott is part of the proof.”

The man who controls over 800 companies in 50 countries said Australia needs to better its relationship with neighbouring nations Indonesia and China, warning that a “friendly and open relationship” with the latter could have to withstand a possible upcoming economic contraction in the world's second biggest economy.

Mr Murdoch stayed almost silent on the court case against his newspapers in the UK, accused of hacking the mobile phones and emails of politicians, celebrities and private citizens to source stories.

He did describe his media companies as a “disruptive influence”, saying he has “always been a firm believer in providing the public with choice and access to quality content”.

In revelations from the case so far it would appear the “disruptive influence” is on the privacy of many citizens, and that Murdoch’s does not mind obtaining “vital and independent information” via methods independent of the law.