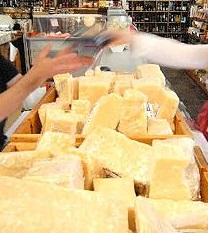 A new figure has entered to the bidding dance for the takeover of Warrnambool Cheese and Butter, a much-loved brand for many Victorians.

New Zealand dairy giant Fonterra has made a move with a view to owning the cheesy Australian manufacturer. Fonterra negotiators have reportedly taken a side-door approach though, bidding for an increased stake in Bega Cheese, a local runner in the race for the Warrnambool brand.

Insiders say the move to a 10 per cent shareholding in Bega is a sign Fonterra may expect bidding for Warrnambool Cheese and Butter (WCB) to take off – and it is seeking to benefit from whoever buys it out. There is also speculation the Bega would itself be in line for a takeover after the sale of WCB.

Bega is one of three prime contenders for the takeover of WCB, the others are Murray Goulburn and Saputo – a massive Canadian supplier and distributor.

Financial analysts say Bega stocks will rise on the investment by Fonterra, and would increase the value of their bid (which includes Bega stock) to possibly match that of the Canadian Saputo brand.

The ACCC has this week ruled that while Bega and WCB both operate dairy manufacturing plants, Bega’s bid would not be considered anti-competitive if it were successful.

“The ACCC concluded that a merged Bega and Warrnambool Cheese and Butter would continue to be constrained by other dairy manufacturers that they compete more closely with in the acquisition of raw milk, including Murray Goulburn and Fonterra,” ACCC chairperson Rod Sims said.