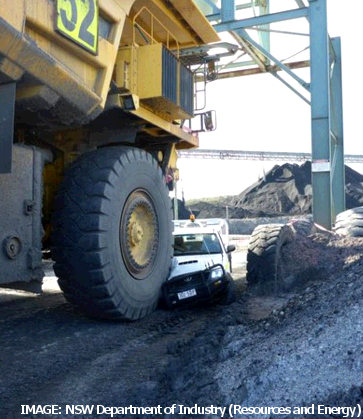 The NSW Department of Resources and Energy has released its report (available in PDF form) on an incident in August which saw a haul truck at the Ashton Coal Handling and Preparation Plant crush a light vehicle.

The truck - a Komatsu 730E hauler - had been parked to inspect an oil leak on the left-hand rear wheel.

The site mechanic determined that the truck had to be taken out of service and left the scene while the operator went to move the truck.

But the truck would not start, and its driver was not able to reach the mechanic on the radio, so he phoned his supervisor.

Eventually the mechanic returned with an electrician to restart the truck. They parked their ute near the front of the truck to connect jumper cables to the truck’s battery.

The electrician was in the passenger seat of the ute while the mechanic attempted the jump start.

This was unsuccessful, but the truck did fire up when the mechanic tested the first starter motor.

On his way back up the stairs to the cab, the mechanic noticed the truck was rolling forward.

He shouted to alert the driver to stop the truck using the brake/retard pedal.

The electrician had by this time noticed the truck rolling forward, but found his door had locked.

He was forced to climb out of the passenger window of the light vehicle, and escaped just in time to avoid serious injury.

The truck only stopped after the front right tyre rolled onto and crushed the front of the light vehicle.

Extensive testing by safety authorities found no major faults in the braking system, while the driver claimed the park brake and dump brake were on.

The report says “tests confirmed that shutting down the truck engine automatically applied the park brake, regardless of the park brake switch position, as the park brakes are spring-applied and rely on hydraulic pressure generated while the engine is running to keep them released”.

The investigation also found that the starter motor test circuit bypassed all interlocks, including the park brake switch interlock.

The authorities said that this bypass was critical to the incident, because if the park brake switch was in the off position while the starter motor was tested, hydraulic pressure could build in the park brake circuit and disengage it, letting the truck roll forward.

They determined that parking procedures had not been correctly followed, especially since the truck was not parked in a “fundamentally stable” position.

The review said the vehicle should be parked so that it is unable to move even without the parking brake, by using wheel chocks or something similar.

In addition, the authorities said the vehicle was not isolated before the inspection, and the light vehicle was parked outside the line of sight of the truck’s operator.

The report also said that the importance of continuing the task of emptying waste bins influenced the behaviour of both the mechanic and the operator.

It was suggested that the operator may have overlooked applying the park brake, or possibly engaged the dump brake by mistake.

The investigators found no record of any risk assessment or change in management process, allowing an ineffective risk control to be applied to the starter motor test circuit.

The report highlighted “the importance of using appropriate investigative techniques to avoid attributing an incident to a single causal factor, if an investigation is to achieve its intended outcome of preventing future recurrence of an incident”.