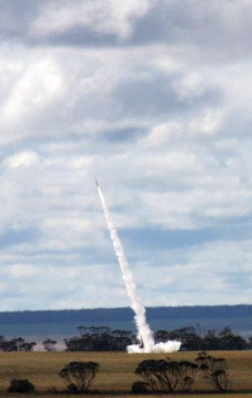 The launch aimed to reach 85 kilometres - the highest any commercial rocket had reached from Australian soil.

The successful launch over the weekend follows an earlier attempt last Tuesday, in which the 3.4-metre long, 34-kilogram rocket failed.

Experts are out searching for the rockets and payloads that have fallen back to Earth.

“We as Australians have achieved something incredible today, because today at Koonibba, Australia took its first small step towards once again being a proud space-capable nation,” Southern Launch chief executive Lloyd Damp said.

“Today Southern Launch demonstrated our ability to launch our first space-capable rocket, and within two hours, launch another rocket.

“This demonstrates our ability to provide a future responsive space access to DEWC Systems and our broader customer base.”

DEWC is a company that teamed up with Southern Launch to test launching processes, and is also developing satellites for the Australian Defence Force to detect radar signals from enemy forces.

It made a small device that was deployed to the edge of space during Saturday morning's launch, to collect information with built-in sensors on its journey back to Earth.

“The rocket is unlike any rocket ever launched in Australia, and is part of what is known as New Space technologies — small rockets carrying reduced-sized satellites using commercially available technologies,” Federal Defence Industry Minister Melissa Price said.