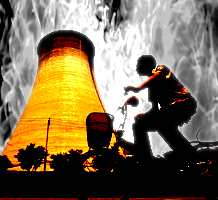 Japan is moving to remix its energy industry, adding 11,000 megawatts of gas and coal power to replace its lost nuclear supplies.

As the clean-up around the destroyed reactors from the 2011 Fukushima incident continues, the Japanese government says it will step up plans to acquire more coal and natural gas amid claims that many nuclear units will not come back online.

Tokyo Electric Power Co, the operator of the Fukushima plant, and a number of other regional bodies announced plans to add 11,000 megawatts (MW) of gas- and coal-fired electrical capacity.

Outside companies will be contracted to build new generators, as the supplier deal with incredible costs from the shut-down of nuclear sites.

All 48 of Japan's previously operable reactors remain closed, with no restarts scheduled in the near future.

“Given the current unwillingness of the government to have stronger support for nuclear power they have to be prepared for the future replacement,” said Tatsujiro Suzuki, the outgoing vice chairman of the Japan Atomic Energy Commission.

The approval of the new basic energy framework has been a long battle in Japanese politics, with the ruling Liberal Democratic Party and its coalition partner New Komeito squabbling amongst itself and holding up the deal.

Most of the plans for new constructions are aimed at “base-load” coal-fired sites, which have fallen out fashion and utility in Japan due to concerns about air pollution.

Strict protocols have been placed on the projects, forcing the utilities to use only the highest-rated technologies for limiting carbon dioxide emissions.

Other regulations, which have been in place since 2012, force the monopoly energy companies to hold open and competitive auctions for new plants.

The companies can bid for plants themselves, or sometimes bypass the auctions altogether as long as they meet cost-cutting criteria. An auction for 2.6 gigawatts of coal-fired plants last year attracted bids for just 680 megawatts.