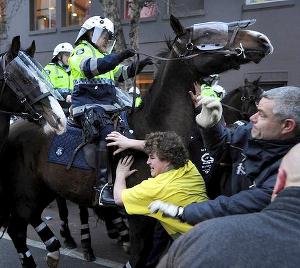 Illegal blockades at Melbourne construction sites have led to a $1.25 million fine for the Construction, Forestry, Mining and Energy Union (CFMEU).

The union organised a four-day protest in 2012, which saw several clashes as workers stood in defiance of a court order at the Grocon Emporium site in Melbourne's CBD.

The protest was set up by the union to fight for its right to wear union logos and have formal representation at Grocon sites.

The mass turnout caused some altercations with mounted police, who had been brought in to escort non-union workers onto the site.

The CFMEU has now been fined $1 million for contempt of court over the Emporium blockade and a further $250,000 for protests at two other Grocon sites.

Grocon, a major Australian developer, said the stand-off was costing over $300,000 a day in lost productivity.

The Victorian LNP government’s Planning Minister Matthew Guy said the union’s actions should be admonished by the Labor party.

“Today is the day that [Victorian Labor Leader Daniel] Andrews needs to stand up and sack the CFMEU from the Labor party, and stop backing them,” Mr Guy said.

“If he doesn't, it's a sign of weak leadership.”