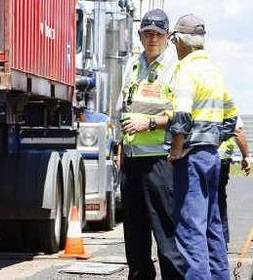 Operation Uplink was a joint effort between RMS and NSW Police to crack-down on speeding and defective trucks on the Sturt Highway at Moree and the Newell Highway at Narrandera. Of a total 300 trucks stopped, 64 were issued defect notices and 54 got traffic infringements.

The defects ranged from unsecure loads in three rigs to 24 cases of non-compliant or missing engine control modules, which limit truck speeds to 100km/hr.

Director of Customer and Compliance for RMS, Peter Wells, says the department sees a problem in the level of non-compliance with fatigue, maintenance of vehicles and load restraint regulations.

“Previous intelligence gained through Operations South and Candid identified similar levels of non-compliance and demonstrates the need for continued operations along the length of the Newell Highway,” he says.

The breaches were largely in the regulations that some drivers find most annoying, but authorities say they are in place for the safety of operators and other road-users.

Random breath tests led to the issue of eight court attendance notices. NSW Police Assistant Commissioner John Hartley said one of his major concerns after the sweep was the amount of tampered and defective ECMs.

“Those drivers or operators who have their trucks set at more than 100km/hr need to get the message the joint heavy vehicle taskforce will continue to drive speeding out of the industry... truck drivers who think they can use the Newell or Sturt highways, or any NSW roads, as speed corridors need to think again,” he said.