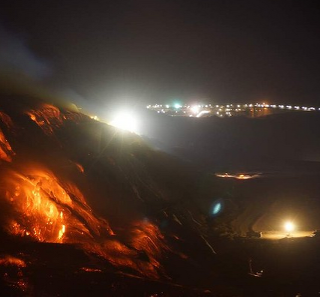 A Victorian court has heard Hazelwood Power Corporation should have foreseen a fire in an open-cut coal mine that burned for weeks.

A fire in Hazelwood’s open-cut brown coal mine burned for 45 days five years ago, blanketing parts of the Latrobe Valley including the town of Morwell in thick smoke carrying coal dust.

Hazelwood Power Corporation (HPC) faces 14 charges over allegations it exposed workers and the wider community to risk in breach of the Occupational Health and Safety Act.

The trial before Justice Andrew Keogh was recently moved to Melbourne due to concerns that a jury in Morwell would be too familiar with the details of the case.

In its first session, Crown prosecutor Sally Flynn QC told the Supreme Court the cause of the fires was irrelevant.

Ms Flynn said the company should have prepared itself for the “very substantial risk to health and safety” posed by a potential fire.

“During one of Victoria's hottest and driest summers, significant bushfires took hold in the Latrobe Valley,” Ms Flynn said.

“When a fire occurs with brown coal, it's known to produce hazardous gases, carbon dioxide and particulate matter — very fine particles and liquid droplets made up of acid.

“This is not a trial about the fire occurring or the consequences of it, it's about workplace safety.”

“Having those three things was all that was required for this situation to occur,” she said.

The 14 charges levelled at HPC include seven relating to employee safety, and seven to community safety.

Ms Flynn says HPC did not carry out a suitable risk assessment or prepare for fire danger.

The mine allegedly lacked suitable reticulated piping for firefighting, was overgrown with vegetation, and its workers failed to start “wetting down” exposed coal early enough.

The jury heard that the mine’s power supply failed during the fire, impacting the water supply.

It is also alleged that the company failed to prepare for that possibility, and so had no alternative power supply, and not enough staff to immediately suppress any fires on a weekend of extreme fire danger.

“The prosecution's case is that the fires ... were events that could be planned for,” Ms Flynn said.

The company has pleaded not guilty to the 14 charges, and its lawyer says previous fires in the mine had not indicated the potential for risk to the community.

Defence barrister Ian Hill QC said HPC and its employees “were alive to the risk of fire, understood it well and were cautious”.

“Fire was recognised as a major mining hazard or in lay terms, a top ten occupational health and safety risk,” he said.

He said HPC had a highly competent and well-trained workforce in place on the day of the fire, and denied that vegetation outside the mine contributed to the fire.

The trial is set to take around eight weeks.