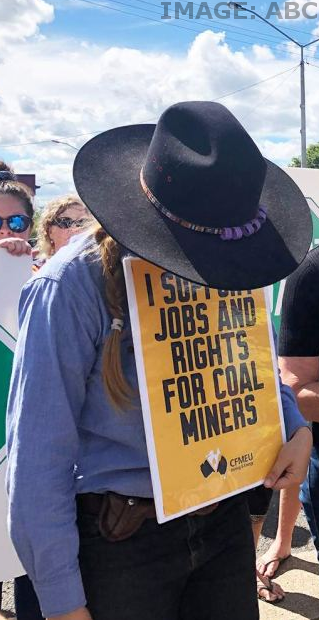 An anti-coal convoy has been met with a frosty welcome in the tiny Queensland coal-mining town of Clermont.

The Bob Brown Foundation convoy has travelled 5,000km from Tasmania to Queensland to protest the Adani coal mine, but many locals were less than receptive to their conservationist line.

“Some people did get very frightened yesterday and so they might, when they're being threatened, when you have women alone in cars with children.”

One man was arrested for allegedly injuring a woman by riding his horse through protestors.

Locals met the Stop Adani convoy with “Start Adani” placards, while police said there were reports of firecrackers going off near the showgrounds where protestors were camped.

“Clearly that there were some emotions running between the local people with the people arriving from out of town in the convoy,” Inspector O'Connell said.

“There's been no complaints to us of anything criminal … I'm sure it was a moment of concern though for people in the convoy to get through that, but I'm sure they were also quite reassured to see a very strong policing presence there,” he said.

Convoy participants held a peaceful protest in the showgrounds on Sunday, including workshops and speeches from local indigenous leaders.

“We are not imitating nature, we are part of nature. You destroy nature and you destroy us,” Uncle Adrian Burragubba said.

But they did little to win over locals, with some businesses even closing their doors to the protesters.

The local pub held a pro-coal rally, featuring a banner that told the convoy to “Go home, turn off your power and walk”.

“We don't want people from down south coming up here and telling us how to run our state,” Publican Leslie Boal told the ABC.

“It's going to cost the economy a lot of money if these mines are closed.

“We're not too worried about the business side of things, it's only for a couple of days. It's better for us [to refuse service] in the long run.”