Golden age for new mine 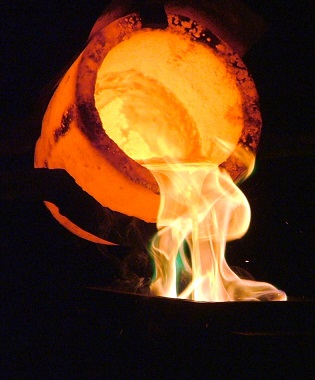 Liquid gold is flowing as Tropicana pours its first measure from the newest gold mine in WA.

The Tropicana joint venture between Anglo Gold and Independence Group sits 330 kilometres north east of Kalgoorlie. It is expected to become one of the country’s top few gold mines in coming years, now that operations are underway.

Tropicana's general manager Duncan Gibbs says a milestone has been reached that few projects can manage; the gold pour was on budget and ahead of schedule.

“The gold bar really represents the plant being commissioned, we've actually just commissioned the high pressure grinding rolls which are the last major unit of the plant over the weekend so we've still got some fine tuning adjustments to be done within the plant but she's basically all up and going now,” Mr Gibbs said.

It’s the end of a long road and the beginning of a golden age for the Tropicana site, after more than ten years in development it now has tangible evidence of its worth. It will be good to see the success for the 500 workers currently employed on site, who will be reduced to a permanent force of 450 when construction is complete.

With the international gold price tending lower than normal and the Australian dollar basically all over the place, Mr Gibbs said it is a good thing the mine was designed with scalability in mind.

“We'll be actually one of the lower cost producers in Australia, cash costs are forecast to be in the low 700's so around 710 to 730 (Australian dollars per ounce) is what we are projecting over the life of the operation.”