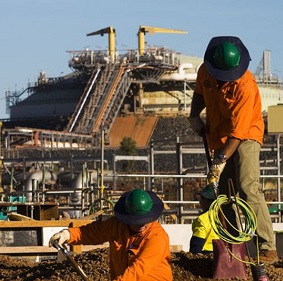 Workers at a Western Australian construction project have been fined over a million dollars for going on strike.

The federal court has found 117 workers guilty of illegal strike action, handing down a total of $1.068 million in fines to split between them. The charges stem from eight days of industrial action taken at the $8 billon Woodside LNG Expansion Project on the Burrup Peninsula near Karratha.

The company behind the build denied a claim from the workers. Staff said they were entitled to redundancy payments under union collective agreements and re-employment on the next phase of the project.

The workers were issued a return to work order after the first day of the resulting action, those that did not return were fined according to how long they kept up the strike. Eighty-five staff were fined $10,000. Sixty-one of those received a three year suspension of half their fine, because they had complied with the AIRC injunction and not engaged in further unlawful conduct

Thirty-two workers will pay amounts ranging from $1,000 to $8,750 - though twenty-four of that group also received a suspended payment option.

Reports say the fines are the highest penalty ever imposed against striking workers in Australia’s history.

“Employees had the ability to exercise a dispute through the settlement procedure without the need to take unlawful industrial action. It comes down to accountability.”