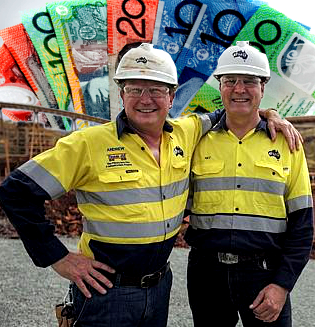 Fortescue has completed an incredible $9.9 billion expansion in the Pilbara, opening the doors on its newest Western Australia mine.

Fortescue Metals Group founder Andrew Forrest was on site with West Australian governor Malcolm McCusker on Friday to announce the starts of the Kings mine in the Hamersley Ranges.

The Australian mining magnate says he has not been worried by reports that Chinese iron demand will drop.

Federal Parliamentary Secretary to the Minister for Industry, Bob Baldwin, was on site as well. He read from a letter of support by Prime Minister Tony Abbott, which repeated his pledge to repeal the mining and carbon taxes.

The multi-billion dollar expansion included the construction of two new mines – Firetail and Kings, as well as upgrades at the Christmas Creek mine. The project also included major extensions to FMG's port and rail infrastructure.

Having the new sites in operation will help Fortescue pay down its $US7.8 billion in net debt. The company says it will now embark on a new round of exploration in the Pilbara region.

“Our key focus right now is to make sure we consolidate our production at 155 million tonnes, drive costs out of the business and to pay down our debt rapidly,” FMG CEO Nev Power said.

Mr Power says he would like to see iron ore prices hit $US110 to $US130 a tonne this year.