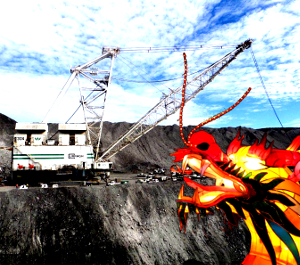 Moves are afoot to secure funding from China to back Adani’s Carmichael mine.

Adani is looking for Chinese money for its giant coal mine in North Queensland, but China's Australian embassy says any such bid would need central government approval.

Senior embassy officials say no applications for funding have been made.

“Myself and Mark Burrows went to see senior officials from the Chinese embassy; we explained that China might think that Australians supported the Adani mine and we gave them a lot of evidence that that was not the case,” Mr Cousins told the ABC.

“The Chinese embassy was very forthright in saying that investment from a Chinese corporation would require the approval of the central government and that also no such proposal had been put.”

A director of Adani's Australian subsidiary Adani Mining recently stated that Adani had secured finance from China, with an official announcement coming soon.

When questioned, Adani has not denied reports that finance from China was imminent.

“It's just another in the series of lies that Adani has told the public of Australia and the Australian Government.

“I mean, these things are simply not true.

“If you went back through the history of Adani's statements in Australia since this project was first mooted, they have never met a single deadline that's been set and they have told so many of these lies that I can't believe that they haven't been held to account for them.”

Mr Cousins said his interactions with the Chinese embassy were prompted partly by the actions of Coalition MP Barnaby Joyce and trade minister Steve Ciobo, who have lobbied Chinese officials in support of Adani's Carmichael mine.

“There's a letter from the Australian Government to a foreign government offering support for a commercial enterprise that isn't even an Australian company. It's a foreign company,” Mr Cousins said.

“I've been in business a long time one way or another; I don't think I've even heard of such a letter being written previously.”