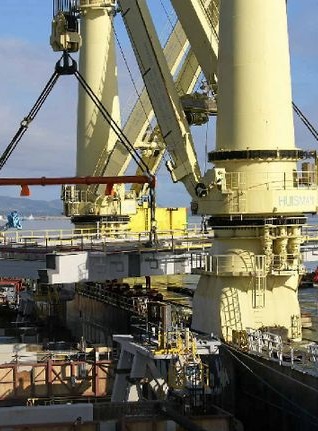 Things are coming together on the site of the new coal terminal near Gladstone.

The first of nine deck units which will form the base of a large wharf have been installed at the Wiggins Island Coal Export Terminal (WICET); being constructed at Golding Point to the west of the existing RG Tanna and Barney Point Terminals. The new coal export bay is the latest addition to the ever-expanding Port of Gladstone.

The project is being funded by mining companies with investments in Queensland, as well as a few enterprising groups looking to start digging. First shipments are planned for 2015 – at which point at least three of the deck modules should be in place.

These are no council jetties though, with the two modules weighing in at 656 and 342 tonnes. A mammoth 8.5 hour effort was undertaken just to lift and place the pieces, requiring the skills of fabricators SinoStruct, Monadelphous Muhibbah Marine Joint Venture, Jumbo Shipping and the WICET PCM team.

WICET acting General Manager of Project Development Peter Lyons said it marks an important time for the build: “Significant progress has been made on both the wharf and jetty structures... to date, almost 40 per cent of the 341 piles, which form the foundations for these structures, have been driven into place.”

Officials say WICET stage one is now at 65 per cent completion.