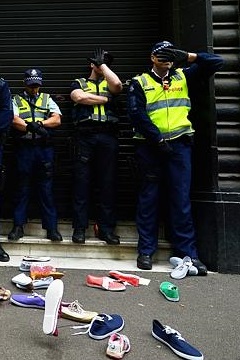 Federal Treasurer Joe Hockey has been engaged in a light scuffle on his way into Victoria’s Parliament House.

Mr Hockey laughed off the encounter, though he had to be escorted by police guard when he later left.

The treasurer was accosted by a mob of disgruntled student-protestors, speaking out about proposed changes to university fees and entrance requirements.

The unruly students should have turned up in greater numbers, the Treasurer later said.

“We're a free country - thank God we have the right to protest - but in my day our protests were a little bit bigger.”

“If they're going to protest they want to make it meaningful... in my days protests were far more formidable and more excitable and they actually picked on the right person.

“I was bigger than most of the protesters.”

One of the chief concerns of the protestors was recent plans to package students’ HECS debt as a financial asset and offer it for sale. The idea has been touched upon by Education Minister Christopher Pyne, who has this week confirmed it will be an option considered by the upcoming Commission of Audit into “unnecessary” government expenditure.

The plan has caught the attention of Opposition higher education spokesperson Kim Carr, who said: “the only way this makes any economic sense to a purchaser is if they can make money out of it. It would have to involve higher charges for students via increased interest rates or altered terms of repayment.”

Professor Bruce Chapman, the architect of Australia’s HECS system, said: “the politics of this is really about when governments think they want the money. The price is they won't get the money in the future.”

Speaking in Sydney, Professor Chpaman speculated that the present $23 billion “stock of debt” could attract a tender of about $15 billion.

As much as the crowd may have wanted a more meaningful reaction from the much “bigger” federal politician, they had to content themselves with burning an effigy of the Prime Minister and lobbing their shoes at the Liberal Party headquarters.

Students flung footwear in reference to an event in 2008 when an Iraqi journalist threw his shoe at then-US President George W Bush. Hitting someone with a shoe is considered deeply insulting in many Middle Eastern countries.

The students invoked the perception of George W Bush in countries the US invaded, calling the Prime Minister and federal Government “oppressors” while chanting “education is a right, not a privilege, we won't pay” and “no cuts, no fees, no corporate universities.”