Protests may be hindering safety for workers turning the first soil on the massive East West Link project, according to unions.

The Victorian Government this week announced the major contenders on the shortlist for the multi-billion dollar tunnel, while protestors have tried to interrupt preparatory drilling activities at a number of sites.

Unions are calling for urgent meetings with members of Melbourne councils and community activists to see if anything can be done before workers are put at risk by the unauthorised intrusions.

Protestors have already run up against hefty police presence at sites near Clifton Hill and likely Carlton North today. The large number of concerned citizens and anti-tunnel activists on scattered work sites could be a recipe for disaster, according to Victorian Trades Hall Council secretary Brian Boyd. 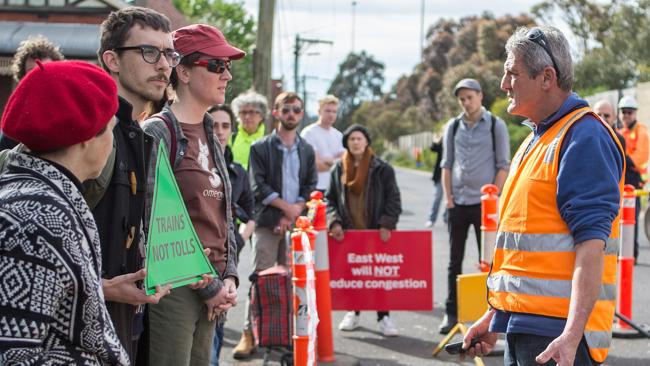 “We don’t want any workers in harm’s way, that’s why they’ll speak to them,” Mr Boyd said.

Jolly says “the vast majority of people down there are actually local residents — we’re not going to put them in a suicide mission against police.”

He claims the fight would continue if unions were seen to “jump into bed” with the state Government to push the project ahead.

Premier Denis Napthine had earlier commented that the election of a Coalition federal government meant a new time for the issue of industrial relations on building sites. He had also welcomed the return of a “tough cop on the beat” for such matters.

Three consortiums have been short-listed for the East West tender, reports say the winning bidder will be announced before August next year. Major building firms East West Connect, Inner Link Group and Momentum Infrastructure are all in the running.