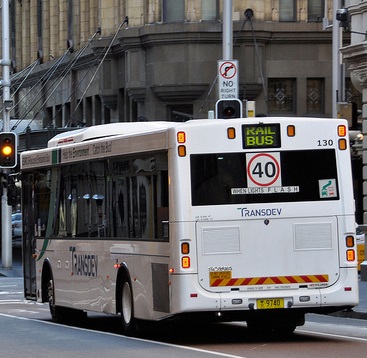 Sydney bus drivers say the lives of many are being put at risk by their intense timetables.

Bus companies are reportedly putting the hard word on drivers to stick to the schedule, which the people behind the wheel say they cannot do without neglecting safety – especially at peak times.

Transdev, a private operator which runs buses in Sydney’s southern suburbs has reportedly written to drivers warning of “disciplinary action” if they are more than a few minutes either side of the times they are told. The notoriously wild traffic in Sydney makes that near-impossible, drivers say, and its set to become worse with new timetables next month.

The buffer time for some stops will be less than a minute on the new schedules; some drivers will have just six minute turnaround times in peak hours.

“They have no time to load passengers,” an anonymous source told Sydney’s Daily Telegraph.

“All it takes is one elderly passenger, wobbly in the legs, to board and get their coins out and they are late. It’s not fair on drivers and it’s not fair on passengers.”

A leaked letter to Transdev drivers reportedly said: “Any driver identified as departing before the due time, may face disciplinary action.”

“Any driver who departs more than five minutes 59 seconds late without a valid reason may also face disciplinary action.”

Transdev are not the only firm to sign up to the onerous new performance targets put forth by Transport for NSW.

Transport Workers Union bus official Nimrod Nyols said a recent $48,000 fine that Transdev received will probably be the cause of the crackdown, after the company was charged by Transport for NSW for failing to meet a 95 per cent on-time target in two of its regions.

“You can’t have every bus in Sydney turn up at the prescribed time, not when the timetables are as tight as they are,” Mr Nyols said.

“They are hanging drivers out to dry so they don’t cop any more fines.”

A Transdev official said the company monitored all its buses by GPS, and could adjust a timetable if the route was found to have inherent delays which were not the fault of the driver. Transport for NSW says it would have to approve any timetable changes.

NSW Transport Minister Gladys Berejiklian says: “I don’t apologise that this Government has put in place bus contracts which set higher standards than ever before and are driving our bus operators to improve the service they offer customers”

“The new Sydney metropolitan bus contracts apply financial penalties to operators who do not meet the standards and this is designed to ensure customers receive reliable, clean and safe bus services and taxpayers receive value for money.”