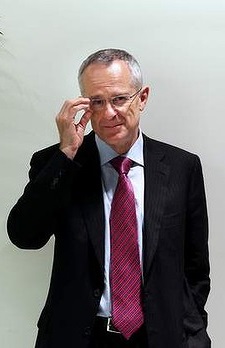 The head of the Australian Competition and Consumer Commission (ACCC) says it is not worth spending piles of money on new roads when we can change the way people use current ones, and make more money from that.

ACCC Chairman Rod Sims says the costs of using roads should be linked to the people who actually use them, and that fees should try to forecast future needs rather than react to historical ones.

In a speech to the University of Wollongong’s SMART international symposium on future infrastructure, Mr Sims said he followed the same line as some of the national regulators. He rejects the traditional charging models for not accurately reflecting complex building and maintenance realities.

“We have a number of important freight transport link roads where there can be limits on their use by heavy vehicles,” Sims says.

“This can reflect the fact that the trucks that use the road are not charged sufficiently to cover the damage they do to the road and, if they were, the funds raised would not go to those responsible for maintaining or upgrading the road... making this problem worse, the charges trucks pay reflect past road spending.”

“There is no mechanism to approach users to suggest they pay for road usage in return for particular roads being built or upgraded. In rail and energy, for example, user charges are set on the basis of a future build and spend program; what you pay is linked to what you get.”

“Standard regulatory practice could address this.”

Mr Sims has acknowledged that congestion charges like those imposed in Britain and other countries remain a controversial topic here, with public opinion typically against the impost.

“We can solve congestion via traffic queues or congestion charges,” Sims said.

“The community largely now accepts that it needs to directly pay for certain toll roads... it does not seem a large stretch to move from paying for which road you use to paying according to when you use it.”

“Trying only to build more roads to reduce congestion is not likely to work.”