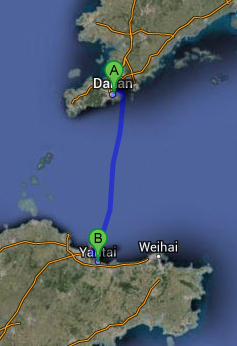 China has dusted off its idea to build an underwater rail tunnel across 123 kilometres of the Bohai Bay, which would be the world’s longest if it goes ahead.

The Chinese government has indicated it is considering the plan to connect Dalian in the south of Liaoning province with the city of Yantai in the Shandong province.

China has been kicking the idea around since the nineteen-nineties, but it has been prohibited by cost issues and the fact that the bay is one of the country’s most earthquake-prone regions. The exact path of the high-speed train would traverse two separate seismic fault lines.

The benefit of the tunnel is clear; estimates show a journey would take 40 minutes through tunnel, as opposed to a current 8 hour trip over the water or about 1400 kilometres of coastal driving to go around.

Engineers say that such a tunnel could be made safe with adequate precautions, but the actual digging of the shaft presents numerous risks in itself.

The planned excavation of two channels 30 metres below the seabed will allow trains to run in both directions at once, supported by a maintenance tunnel between them.

Geological experts have said in the past that excavation through such active fault lines will bring virtually unprecedented risk.

Despite the widespread issues, the benefits seem to appeal enough for the project to be pitched to the government every year since 2009.

Reports say it is getting close to a green light, with its recent incorporation in a regional development plan getting approval.

China’s State Council will consider the latest blueprints in April for possible inclusion in the 13th Five Year Plan, which runs from 2016 to 2020.