ACT called to give up list of asbestos homes 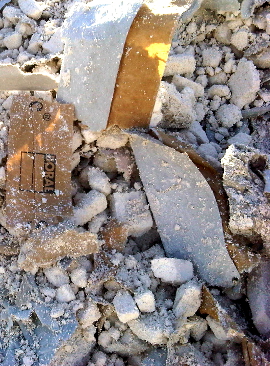 The Construction, Forestry, Energy and Mining Union says its members are risking death every day, and the ACT government is adding to the problem.

A stoush is forming over the ACT’s refusal to make public a list of around 1050 Canberra houses known to contain asbestos.

Construction workers across the city say they want to know which houses contain the asbestos-laden Mr Fluffy insulation, but the government will not tell them.

The workers say their risk increases with every gyprock wall they cut into.

The Canberra Times says local worker Andrew Laird was told the list of potentially cancer-causing homes was unavailable “due to privacy reasons”.

Just a few asbestos particles are enough to cause the deadly respiratory cancers associated with the obsolete insulation material.

Mr Laird says the government expects workers to roll the dice, with their lives at stake.

“It would appear that we, that is anyone contracted to do renovations, have to start a job, remove wall board, then find loose asbestos in the midst of demolition, rather than check a list they won't publish,” he told the newspaper.

“Plumbers, electricians, renovators big and small, builders carrying out extensions or small job building work like me all need to know which houses have loose fluff asbestos in the wall cavities.

“If the responsibility is with the house owner to inform tradespeople and builders prior to a quote being supplied, how many ways can that go wrong?” he asked.

The CFMEU says it is much more expensive for builders to factor in the cost of legal and safe asbestos removal, when others are willing to illegally deal with it themselves.

Mr Laird said some contractors are hesitant to bring up occupational health and safety issues as a first point in negotiations, as “most of them want the work and don't want to come off as whingeing builders wanting to add hundreds or thousands to a job to get asbestos dealt with.”

“It just shouldn't be up to the tradespeople to have to deal with this stuff and yet they're the ones carrying the can,” he said.

A spokesperson for the ACT’s acting Workplace Safety and Industrial Relations Minister Katy Gallagher said the government is “happy to consider sensible, effective and practical proposals to enhance safety in relation to asbestos”.

He said the government has sought advice on “the development of a package of measures - which may include legislative amendments - to ensure that tenants and persons engaged to do work on houses built before 1980 are aware of the potential risks posed by Mr Fluffy asbestos”.

“Such measures are currently the subject of consideration, including with the ACT's Asbestos Regulators Forum, and advice will be provided to government shortly,” the spokesperson said.