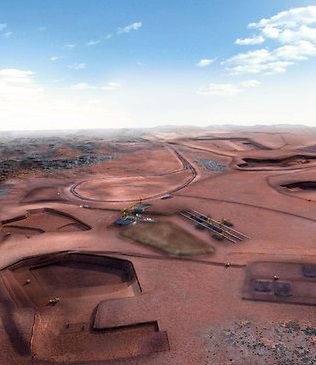 One of the top people at Gina Rinehart’s $10 billion Roy Hill mine has entered the debate on what to do about the iron ore price.

Roy Hill boss Barry Fitzgerald told a business breakfast that a deal between Brazilian miner Vale and China is a warning to domestic producers.

“What it does remind me, and it should remind all of us, that we in the mining industry are in a competitive, international business,” Fitzgerald reportedly told a Morgans Financial breakfast in Perth on Friday.

“What we do needs to reflect the pressures and the actions of our competitors.”

Vale has unveiled a new deal that will see China fund its massive S11D project, which should see an extra 90 million tonnes a year hit the seaborne iron ore market.

The Brazilian miner also has plans to start shipping a blended product with an iron ore content around 63 per cent.

“That particular product is direct competition for both us and the two major producers in the Pilbara and that again reminds us that we are in a competitive environment and that our market share and our position in the world will be coveted by other companies, so we need to make sure we are productive and efficient,” Fitzgerald said, according to industry press Australian Mining.

Roy Hill is currently about 81 per cent complete, and should ship its first ore in September.

When the mine starts producing its 55 million tonnes of iron a year, some analysts predict there will be a negative impact on the iron price.

Roy Hill remains tight-lipped about its break-even costs, but Fitzgerald claims Roy Hill is on the “lower quartile of the cost curve”.