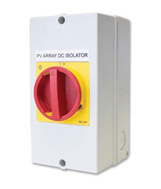 The collapse of a solar company in the middle of recalling a faulty product means electricians will wear the cost in Queensland.

Liquidators were called in to take over for the failed Sunshine Coast company Advancetech last week, before it had completed the replacement of some 27,000 faulty isolators.

The Queensland Government ordered Advancetech to recall the Avanco DC isolators used in their solar electrical systems, but the company was sold just a day later.

The Avanco DC isolators have been linked to a number of building fires, but there have been no reports of injuries or death.

With Advancetech sold and the recall not completed, the new owners appear keen not to have to fix the mistakes of the recent past.

A post on Advancetech’s website says the liquidators, SV Partners, are not legally required to comply with the product recall order.

“As liquidators, we are not trading the company's business and unfortunately we are not able to assist with the replacement of the isolators the subject of the recall orders,” the notice said.

“Unfortunately [we] are not able to directly assist customers of the company or the end users of the products recalled.”

Their refusal has dumped the responsibility (and the cost) on the electrical contractors who installed the isolators, Queensland Master Electricians’ Malcolm Richards has told the ABC.

“The reassurance for the customers involved is that the contractors are still obligated to replace their product for free,” he said.

“But then the drama starts for the electrical contractors who have to then pursue the funds back from the liquidator.”

“There are a lot of small, mum-and-dad operators who are involved in the solar industry, who have installed solar panels under the government rebate scheme, who are now going to be left high and dry and have to stump up the cost of replacing this product, which they bought in good faith as an approved Australian product at the time,” he said.

Richards says Master Electricians has been in contact with the Australian Competition and Consumer Commission (ACCC) and Fair Trading Queensland, to investigate the issue.

“We've asked Fair Trading Queensland and the ACCC just to look into the nature of the business exchange and the liquidation in this case,” he said.

“There's obviously some concerning issues there we want looked at to ensure everything was done properly.”